Hunger Skateparks is skateboarder owned and operated, and a full service concrete skatepark design and build company. Our team leaders branched off from the leading skatepark contractors, where they developed industry building standards and high levels of craftsmanship, in order to shape a core company interested in building more creative parks with community minded principles. Our designs are innovative, balanced, and engaging for all styles and levels of skateboarding. We utilize building techniques that ensure long-lasting parks with low long-term maintenance. Our approach to park designing and building involves a high level of collaboration in order to develop projects unique to the community it will serve. Hunger Skateparks highest aim is not to build parks that few have the ability to enjoy, but to create balanced and creative parks that inspire a large audience.  A successful park is a well-used park.

I have skateboarded for over 35 years, and was inspired to build my first ramps as a 12 year old biker/skateboarder in Kokomo, Indiana. I studied Art and Parks Administration at Indiana University, and have worked in construction for over 20 years. I have built over 60 skateparks in the United States, 2 parks in Denmark, and many private backyard bowls/projects.   I have worked with the many skatepark contractors inlcuding Native Skateparks, California Skateparks, Wally Holladay, Bluestone, and more.

Growing up I built wood ramps and treehouses. In the 90’s I traveled extensively throughout the states and Europe to ride skate spots and parks. Eventually I moved back to Indiana and lived the homesteader’s life on our land we call Homewoods. Compared to the west coast, there was little to skate in the late 90’s in the midwest. I was building cabins in the woods and artist studios for work and traveling to Louisville or Indy to skate. Then when the Bloomington park was built, I helped with labor and that ignited a force in me and I felt the need to build more parks. All my construction experience, background in arts, and my life as a skater came together.  With little concrete experience, but with a large amount of hunger and drive, I decided to build a concrete bowl on my land outside of Bloomington. A small group of skaters and I launched into this large DIY project- at first using bags of concrete, shovels, and chainsaws. This type of situation is what gets me excited, and this is also what makes me willing to work in any setting, with volunteers, with recycled materials, and making a budget stretch without losing the core.

I traveled and worked with a range of contractors all over the country, but what made me want to start Hunger is seeing non-creative and mediocre poorly built parks in my backyard. We deserve better. Small towns with groups of skaters have fundraisers, save for years, and use public money to build a park- and in return they receive cookie cutter designs or pre-fab mediocrity. I find this unacceptable- we have to hunger for more, and not accept these as the outcome.

As an extreme sports enthusiast of several disciplines, I find that inspiration for designs and builds can be found from them all.  Skateboarding, snowboarding, mountain bike trail riding, dirt jumping, and wake skating keep me a happy and engaged person. Everyday there must be time made for a board or wheels under my feet- it has become my medicine.  Whenever I am near the ocean I try to surf and dive, someday I would like to dedicate daily routines to those sports. I find this multi-disciplinary lifestyle brings valuable assets to the table of skatepark design and construction.

A favorite video from Homewoods 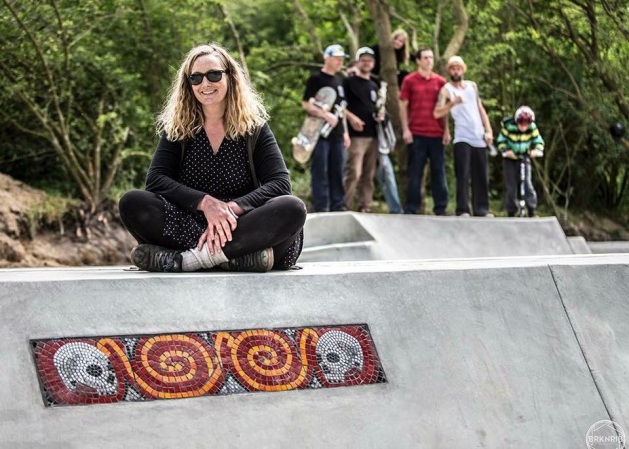 I started skateboarding in college in the 90’s, using it as transportation to get to classes and around town in Bloomington, IN. For 6 years I ran a skateboarding club for local youth and worked to encourage girls and women in skateboarding. I love to skate with my family at Homewoods, and carve around and enjoy parks wherever we travel. I am a skateboard and skatepark advocate, and an environmentalist that supports skateboarding as a viable piece of alternative transportation that can help to reduce carbon emissions. I advocate for safe passage for skateboarders that allows for separate paths for bikes and skateboarders throughout cities as well as in rural communities. I was deeply inspired by our trip to Denmark in 2015 where separated bike/skate/walking lane systems thread through the main throughfares in towns, and connect cities throughout the country. I will continue to advocate for a similar system to be developed throughout our region in the near future.

I oversee all of Hunger’s operations and am responsible for the website, graphics, estimates, contracts, budgets, scheduling, and communications with communities and clients. I am on the design team, designed the Peru Skate Sculpture, and create mosaics for the parks.  Art and skateboarding are key elements of our world, and I try to bring these two together in every project.

Visit my art website for more examples of my work.

Hadley Gephart is our graphics pro who ensures that our work is showcased by visuals that represent our vision and goals. Hadley specializes in illustration, animations, and graphic art. See more of her work on her website . 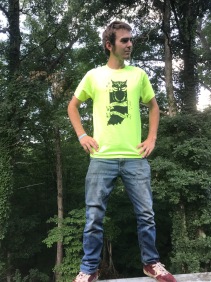 Simon, son of Bart and Christy, is the next generation of skatepark builders. He has grown up building skateparks, starting at age 5 with the Homewoods bowl.  Now at 19 years old, he has directly assisted his Dad in every aspect of construction. While he is currently working on an accelerated business degree, Simon works summers and whenever there are breaks at school. He says his favorite build was the New Castle park build “because the Mayor and the community were so happy and involved in the build.” Simon has a unique perspective on park building because he started so young. Check out an extended interview with Simon here.

Ryan Smith is a leader in Indiana skateboarding, a main figurehead in Bloomington skatepark advocacy, and a skatepark craftsman with a design background.  His background as a skate shop owner and skateboarder hub gives us insight into lasting designs that integrate all styles of skating. Ryan was on the design team of the Bloomington Switchyard Skatepark project, a complicated design off the B-line and in a flood plain.

2018 Jenks, Oklahoma. All the crew sported mustaches for a bit too long that year. Landy Collada.

The Miami, Florida native says he came late to skateboarding, starting 12 years ago, when he was 16. After receiving his Bachelors Degree in Civil Engineering at the University of Florida, he worked in construction management. He then made the shift to building skateparks, where his academic background and personal passions could be united. Landy’s first project with Hunger was the Tahlequah street park rehab, and has been at every job thereafter. His most notable contribution was his work in the shooting, placement and finishing of the shotcrete in the Switchyard Skatepark in Bloomington, Indiana. Landy says his favorite aspects of park building are “in the guts of the build- the dirt work, steel fabrication, carpentry and concrete finishing.” 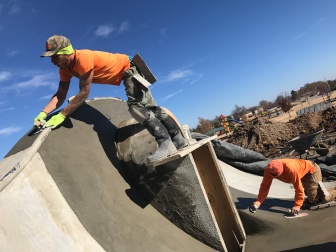 Shane is from Jackson, Mississippi, and comes from a strong southern DIY group of park builders. He has been instrumental in projects such as the Jenks (OK), Breslin Park (KY), Tahlequah Renovation and Bowl (OK), and New Castle (IN) skateparks. Shane shines when the concrete arrives, shooting and finishing.

Casey was born in Peru, IN and started skating in 1986, when he was just 6 years old. His skatepark-building origin story is similar to so many park builders. He had a family member, his Grandpa, who encouraged him to use his tools to build wood skate features. Skaters from the era remember Casey’s driveway and dead-end road, full of wood skate features including a launch ramp, mini ramp, pads, banks – basically the first Peru Skatepark. Casey is a certified welder and came to skatepark building with many skills already honed in from years of flipping houses and working in a fabricating shop. He has been working with Hunger since he volunteered at the Indy Skatepark Rehab in 2016. Casey said his favorite part of working for Hunger is that “Bart is never satisfied and pushes the team to develop their skills, to build a park better than the last, and constantly push the limits of this specialized trade. It’s hard, but I like that part.” He likes challenging projects and his favorite features to build are the non-traditional and abstract pieces that push the boundaries with complicated angles and steel work.

Chris taking a quick run on the punk track before painting the coping- Jenks, Oklahoma, 2018.

Chris was born in Houma, Louisiana and moved to Columbus, Indiana when he was 5. In 7th grade he discovered skateboarding, and after 3 years of skating curbs and homemade PVC boxes, the Columbus outdoor wood park was built. In 2019, the wood park was removed and Chris worked with us to build a new concrete park in its place. Chris was running a large restaurant kitchen when we begged him to join the crew in 2018, after working with him on the Upland Brewery Employee Skate Spot and some backyards around Indiana. His first build was in Jenks, Oklahoma and he says the Jenks doorway entrance was his favorite feature to build. His biggest responsibilities are running the shotcrete pump, and managing day-to-day timelines on all aspects of the build. On skatepark building, Chris said “ I like being a part of something that helps kids and building in small towns like I grew up in where there might not be much to do. It may inspire them to build and dream big. My favorite part of park building is when the forms come off, and we can skate what we built.” 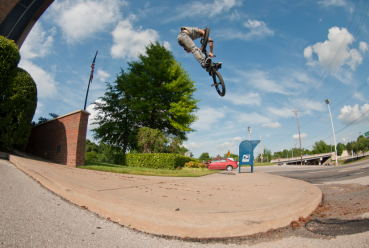 Alex is from Tulsa, Oklahoma and has been involved in park builds around Oklahoma in the Native Skateparks build crew. He officially joined Hunger Skateparks for the Jenks, OK park build. Alex is our representative BMX crew member. He is a true street biker, scoping out spots almost every day after work, especially large drops: like, super scary close your eyes drops. His favorite part of park building is that “we build smiles wherever we go. I can’t tell you how many people say ‘Hey, you’re doing great! This is so cool.’ What other job can claim that?” His favorite Hunger park is in Tahlequah, OK and he says it is “the most fun place to ride in the whole world. I like everything about the bowl set up, and especially the life guard chairs.”

Hunger Skateparks owes a huge thanks to the many dedicated and skilled skateboarders, park builders, and designers on our crew (past, present & future) that help make our efforts successful. Because we have participated in many community builds, we also want to express our gratitude for the community members and public officials who went beyond the call of duty to help bring a skatepark to their town, and continue to advocate for skateparks and skateboarding.