Posted by christyweezer on July 14, 2019 in Interviews with Skatepark Builders/Designers

Shane has been a constant on Hunger builds since the spring of 2017. He knows the ins and outs of the Hunger process, and provides the insightful and sarcastic retrospective summaries that help keep us honest. I’ve always enjoyed talking and hanging with Shane, and am happy to share part of his story with you– Christy Weezer

Where are you from? Mississippi. Born and raised in Vicksburg, but Jackson is my home now.

When did you start skating? 14 years old, early 2000’s. I had a friend who went to California, came back and said, “Skateboarding is the shit, we need to do this.” That’s how I got started.

What was your first skatepark build? Frank’s backyard. We built a bowl 8 years ago. We had no idea what we were doing and totally winged it. First time I ever dealt with concrete. That’s when I got hyped on building stuff. I thought “Yeah, we can do this stuff.” I stopped working for the tile subcontractor and got a job doing flatwork, sidewalks and driveways, so I could learn to build better DIY spots.

I know you are really involved in Jackson’s DIY spot. Yeah, Mill Street DIY. We poured a week ago today, an outside hip into a roundwall pocket. Typically, the way it works is when I get home, in between jobs, I come in super hot and build whatever it is we want to skate. We pull a “Bart” and hold up all these trannies and say “What about this? What about this?” We get fired up real quick. 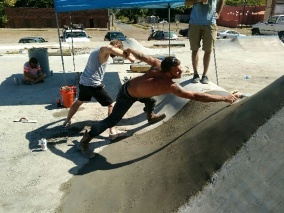 After the Tahlequah (OK) job, we took some panels and used it to pour twice. Brandon and Landy came to Jackson and we poured for 2 days. We floated a deck with panels from Jenks (OK) too. Use what you got.

When did you start with Hunger? New Castle (IN) 2017. Still the sickest build. The crew was rad, I got to work with Scotty (Whorton), meet you guys, getting to be a part of it. Bart just threw the plans out, so organic; it was just sick.

Why the Bridge Bowl? Coming from a DIY background, seeing what those guys did, nothing got wasted. The guys were super rad – Gary, Zach, Scott, Brandt. We got to sleep under the bridge. It was 15 days from start to finish I think. I was there for the concrete. 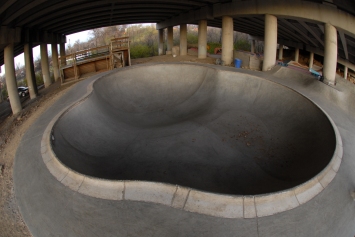 Tahlequah (OK) bowl is the funnest thing we ever built. So fun… There is something for everyone. Everyone that goes there loves it. 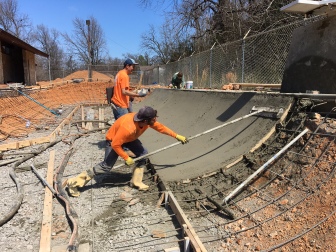 Jenks (OK) was rad because I was there the entire time, from dirt work until the last pour.  I was there for every piece of concrete.

What is your favorite part of the build? Concrete is the obvious answer, because it’s done. Being in the shit, taking it from paper, and making it a reality – a finished product. Layout, formwork… I like it all, but concrete is my favorite. Then you get to sit back, drink a beer, and look at it.

Is there a big difference between the paper design and reality? We say this thing onsite all the time –  “This is an experiment… What happens if we actually follow the plans?”

It’s always pretty close, but we usually add some stuff. Once you get out there, you see what can be better. THAT is a top contender for favorite part of the build – onsite organic changes.

Design is always the hardest part. All these people want different  stuff, and then there is the budget. When it’s done, when it’s built,  people are going to say, “If I designed it…” and they are going to pick it apart. It doesn’t matter if it’s your backyard, your community DIY, or a million dollar public skatepark. It’s incredibly easy, after the fact, to critique it in the middle of a session.

Have you ever worked for a skatepark builder that didn’t make changes in the field?  Yeah, and it’s not bad. It’s just not a stand out skatepark. You wouldn’t be bummed to skate it, but you wouldn’t drive a couple hours out of your way to skate it either.

If you don’t make changes, it won’t be the sickest thing. It will keep you up at night knowing you didn’t make that change to make it better. We have a moral obligation, individually and collectively, to build the best and most interesting thing we can. That’s a big part of what makes Hunger stand out, is the adding and changing of stuff to make it better. That’s New Castle; that is why it was so sick. Every time I turned around it was, “Let’s do this, let’s do that.”

Why do you build parks? It’s the sickest thing I can do with my skill set. I want to be around it all the time, and be around skateboarders that are craftsman. Obviously that’s the prerequisite. But it’s like getting to get up and go skate with my best friends every morning. I love these dudes. 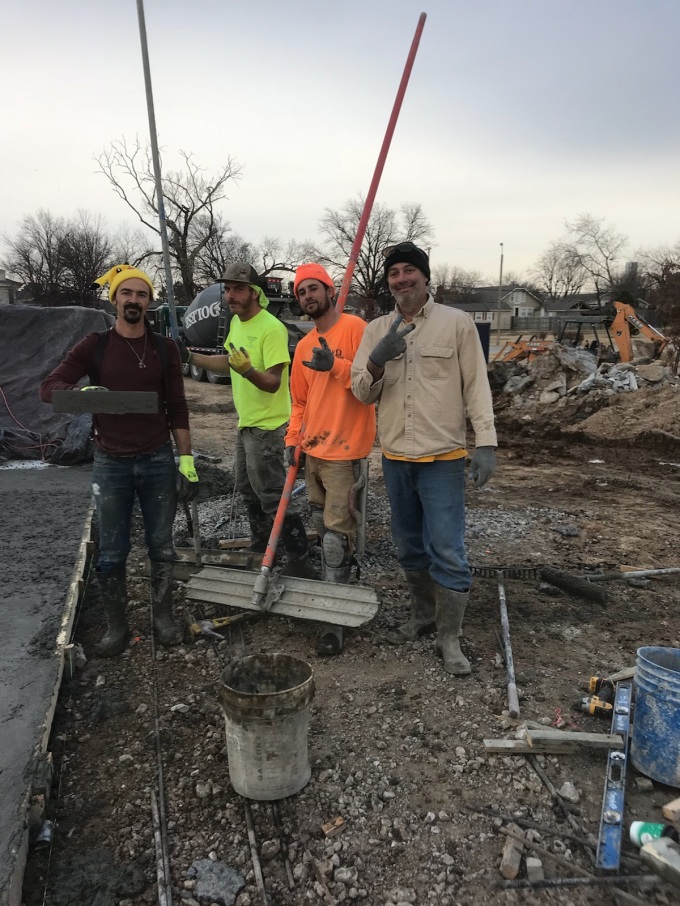